http://www.antoniarolls.blogpsot.com/ for an account of an Artist and Mother in Bognor Regis
antonia.rolls1@btinternet.com to email me
A Graceful Death Exhibition is Growing and Going Places. 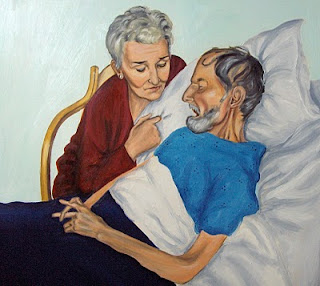 This is Anne and Peter Snell.  Peter asked to be included in the A Graceful Death exhibition before he died, and Anne asked for me to come and see them.  Anne was telling Peter how much she loves him here, and Peter was loved out of this life a few days later.
The A Graceful Death exhibition is becoming more inclusive.  Anne and Peter Snell are featured above, and will be the central piece for the Oxford Exhibition which is coming up next month.  I have found this painting so good to paint, it has taken me some time because Peter's head seemed so vulnerable and precious, as he lay on his pillows.  I wanted to capture his dignity and strength.  Anne has always been very beautiful, and is shown here concentrating on Peter and talking to him.
A Graceful Death will include one more image next month too.  I have been allowed to paint the image of Kate Massey's Grandfather before he died, and when I have finished it you will see what a lovely face and smile this Grandfather had.  I am hoping to have it finished within the next two weeks.  Kate Massey is a student at Queen's Theological College in Birmingham, and was moved to include her much loved Grandfather in the next exhibition.  I am grateful to Kate.
Included too will be some very profound poetry by Penny Hewlett.  Penny is a modest but highly accomplished poet. The first poem I put up of Penny's is entered for a poetry competition so I am using another of Penny's wonderful poems -
10 Years On
extract from the first verses
I thought I was done with this task,
knifing through each circle of the onion
to get at the grief inside,
chopping the flesh of my loss
slice by slice, always another layer,
yet not stopping, not, because I knew
that somewhere the taste of memories
would be sweeter for the tears that I let fall,
that you would return without the bitterness
without the sting of it.
extract from the second verses
I thought I was done with this task
till in a new home the walls looked bare
because you had not seen them, the kitchen table
had just a four legged function where the world was
not vividly explored, the door less welcoming
because your hand had never pushed it wide,
this house did not know you,
and I misses you at its kernel and its core.
Penny Hewlett
(2 extracts from her longer poem "10 Years On")
There is a wonderful piece of writing by a young man who has suffered the loss of two of his friends by the time he was 24.  I am very moved by what Liam has written and will be including it as a booklet for people to take away.  It is called "Change, Emotion and Life".
A Graceful Death has started with my story.  I painted my way through the first two years of my loss of my darling Steve from liver cancer in November 2007.  From the resulting pictures has come the most wonderful response by those who have created something of their own to include in the next showing of the exhibition.  There are more and more people involved in its progress around the country, and this is what I had wanted.  It is very good that A Graceful Death is speaking to those that want to hear, and we are all having this very important but deeply avoided conversation about How Do We Die?  How Do We Survive The Loss Of Someone We Love?
The planned venues for the exhibition are, without finalising the order,
Oxford, Dublin, Westport Ireland, Manchester, a new venue in Birmingham and Yorkshire.
As soon as they are finalised I will publicise them.  And, I will be creating a new website for easy access to the gallery of paintings and poetry and prose.  More soon. 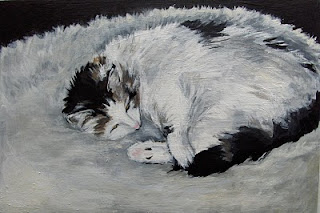 Snowy the Cat RIP, another very important member of the A Graceful Death paintings
Posted by Antonia Rolls Artist and Soul Midwife at Monday, June 21, 2010