A Graceful Death at Milton Manor near Oxford - Eccentric but Good

A Very Loving Exhibition At A Very Eccentric Festival
The Festival of the Nine Muses at Milton, near Oxford, was a wonderful experience.  It was slightly batty, slightly shambolic, but they pulled it off and gave A Graceful Death a huge central space in which to do its magic. 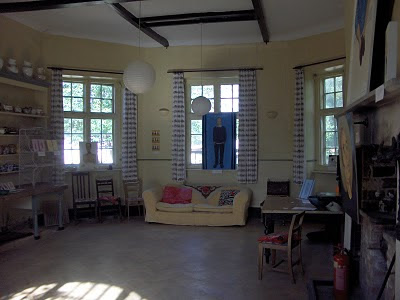 I sat on the sofa here and was joined by various lovely people who wanted to talk, or sit, or discuss life and death, or just remember someone.
There is a more lighthearted account of the Exhibition and the Festival on my other blog, http://www.antoniarolls.blogspot.com/ .   In this account, I want to tell you about some of the experiences the Exhibition gave me and others during the weekend. 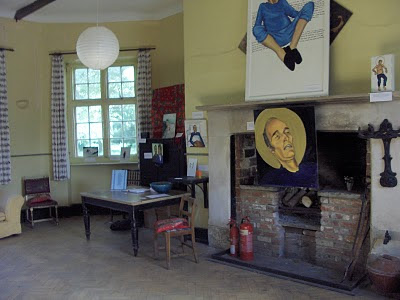 More of the paintings, on show in this huge old tea rooms, once a kitchen or a brewery, depending on who was telling me about it.
I set up the exhibition on the Friday, late.  I wanted to get it all ready so that on the Saturday I could concentrate on the visitors that were due from 10am onwards.  We moved all the clutter that we could, all the tables and chairs, all the urns and bowls, the stuffed animals, the papier mache dragons heads.  All the old rocking horses and table legs, the copper suacepans and the piles of handy cleaning rags.  When the room was as clear as possible I began to set up the piantings.  The room is full of history.  It is full of the smell of centuries, and the slightly musty smell of old wood and plaster.  There were cobwebs and old books and old disintegrating prints everywhere.  And, beautifully, little pots of fresh wild flowers in hidden spots, like on the hearth and behind old bits of wood.
The first surprise came as I was setting up on Friday.  A young man, a healthy tanned hansdome young man came and stood in the room and looked around him.  People often come in and look and then turn and leave, and have no reason to stay.  This young man seemed to be having a very slight reaction to the paintings, so I asked if he was OK.  After a little while, after some talking, he said he had lost his brother a few years ago.  This brother had died suddenly and utterly needlessly at the hands of some unscrupulous people in dreadful circumstances.  My young man was remembering him and feeling his loss.  He didn't like to talk of him, he said, it isn't something anyone can undersand.  But he misses him, regrets his death, and keeps a picture of him so that he can at least see his image daily.  I asked if he would like to add something to the exhibition?  No, he said. It wasn't his thing.  He didn't want to write and he was very private.  But he did want his brother remembered.  So I asked him to choose a teapot from the millions on display, and I would fill it with flowers, and put a little sign saying "David.  With us today with love" and leave it at that.  My young man knew exactly which teapot to chose, an elephant one because David had loved animals.  (This young man rented a flat at the Manor, so knew the tearooms and the teapots very well.)  So that is what we did.  David will come with us for every exhibition now, and I will make a little memorial using anything animal related and flowers and add the little sign, "David.  With us today with love" and explain nothing.  David's brother's face lit up when he saw the display the next day, and I feel that the strength and love that David inspired in his brother is not only a testimony to David's importance while alive, but a real testiment to the gentle, quiet, strong and wonderful young man that is David's brother.  Incidentally, another connection here - I wrote up the essay that I was sent by Liam Tullet, on Change, Emotion and Life, and made it into a booklet.  Liam is a plumber in his very early 20s, as was David's brother.  David's brother found Liam's little booklet and took it away with him with interest.  Liam Tullet connected with another young man through similar experiences and  profession, through a piece of writing he was brave enough to send me.  A very very good piece of writing, I may add.
Most people wandered in and out of the tea rooms and some looked at the paintings, some did not want to see them.  Those that stood still and looked and read were the ones that needed either to talk or to come and sit for a while. I was invited to the Festival through a very passionate and loving young girl called Jessica.  Jessica is in her twenties, and is a powerful personality, and was deeply moved by the exhibition when it was on in Wimbledon.  Jessica arranged for me come to the Festival of the Nine Muses, and had faith that the A Graceful Death would balance well with the theme of Love that was behind the Festival.  Jessica came and bought two of her sisters and bought her mother.  Jessica's mother, Mary,  is someone I loved on first sight.  She understood everything, she looked at and read everything, and came and sat in tears on the sofa.  Her tears were of understanding, not grief.  She is an artist too, a writer and director having been trained first as an actress.  She, like Jessica, just Got It.  We talked and she was very interesting indeed.  She has asked me to join her Theatre Company at the Edinburgh Festival next month, and I said, of course, Yes.  Of course!  But whether or not it happens at such short notice, is another matter.  If it does, then wonderful.  If it doesn't, then Next Time.  Whatever happens, I look forward to meeting both Jessica, her mother Mary again. 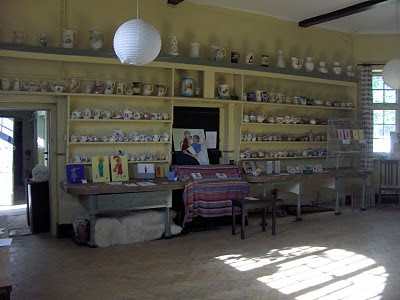 David's brother chose the elephant teapot from this selection.
Then there was the Musician and his Girlfriend, who sat and talked for a long time.  He was a fascinating character, and spoke of his own artistic journey.  He was moved by one painting in particular - this one of

Steve sitting and waiting in the Hospice chair to die.  Holding on minute by minute.   The Musician wanted to create in his lifetime a moment of real impact through his music.  I expect he will do it, but he is very self critical, I wonder if he will know he has done it.
Finally, a lady I met and liked so much, I hope to goodness she contacts me again.  She is a very tall  Ethiopian lady, wearing a brilliant turquoise kaftan and gold jewellery.  When I first met her she had just lain down on the sofa, looking so very regal, but when I said I needed to sit there she leapt to her feet  apologetically, looking deeply embarrased.  I thought I had mortally offended her. I was making tea so I made her a cup, and she tried to pay for it, but I did not want payment so there was another interesting moment.  I told her she was very welcome to sit, and I sat next to her.  I talked to some other people, and she sat quietly and texted and looked around her and said nothing.  Then, she started to join in.  She was so interesting and so clever and so insightful.  I looked at her with amazement, aware that I thought she thought I was mad and that I thought she was offended - not a bit of it.  We talked for ages and I found her the most uplifting and encouraging lady, so very very nice.  She is related, she said, to the Emperor Haile Selassi and sure enough, that is her name.  She had to leave after a while, but came back later to talk some more, and we agreed to keep in touch.  She wants to help A Graceful Death and had some excellent ideas and suggestions.  There is just a Feeling about her.  She is very switched on indeed.
There were many other interesting people, and many other interesting converstations.  A man called Paul dropped by and spent some time with me, and he was very profoundly moved with his own tale to tell.  I was very glad to meet him.  My cousin and her little girl came and was so supportive. 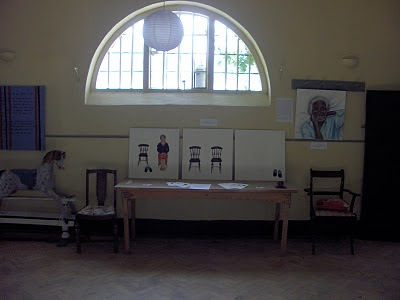 The final view of the A Graceful Death in the wonderful old Tearooms of Milton Manor. 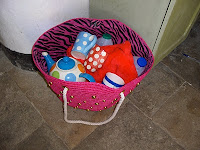 To leave you on a bright note, I packed one of my many spotty teapots and six spotty mugs for the weekend.  No matter where I am, the Tea Standards must be Maintained.  So here is my bag dedicated to Tea Standards.
The Festival of the Nine Muses was a truly unique experience.  It was a wonderful weekend, and I am deeply grateful to have been included. The A Graceful Death is a powerful, deep, raw, loving and passionate exhibition.  Once again, its impact was profound and the lessons I come away with, the people I meet, make me think that Death is a very unifying experience.
Posted by Antonia Rolls Artist and Soul Midwife at Monday, July 12, 2010