A Graceful Death Goes To Dublin
At the end of October, I am taking the paintings to be exhibited at a Private Venue in Dublin.  This exhibition is not open to the general public, and will available as an Invite Only showing.  This is the first time I have exhibited this way, and it is a very good way of asking those who would be interested in the exhibition on a number of fronts.  There will be those who have a professional interest in the subject of End of Life and Bereavement and Palliative Care, there will be members of the medical profession, there will be those representing Religion and others who may be interested in the paintings as works of art.  The organisers of this Private View will also ask friends and family, as this subject is a huge part of every person's life.
I am very happy about this Dublin Adventure.  It will make me aware of a new audience.  I wonder how it will go, and what the Irish and I will make of each other.  I don't know how Irish people view death and dying, I have never asked them.  Maybe they are open to the subject and talk about it more, maybe they are able to cope with it through religion.  Maybe they aren't.  I am intrigued, and realise I will only meet a microscopically small selection of the population, so I won't have all the answers at the end of this showing of A Graceful Death.  I won't ever have all the answers to anything, though.  Much though I would like them.
Here, then, is a new and not yet finished painting for the exhibition. 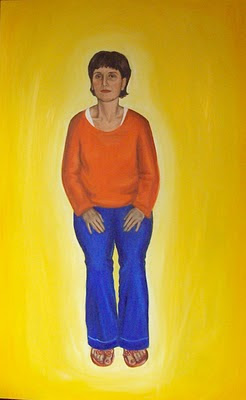 It shows me sitting as a Survivor.  It shows me as someone who has come through the darkest of times into a happier phase of my life.  Here, I am Transcendent.  Losing Steve has not disappeared, I am not as if it didn't happen, but I am living a life Beyond.  The yellow around me is about sheer life, love, hope, light.  It is Newness, Joy, Heat.  I sit without smiling, I am calm and I am without any props, and I don't need to have any expression, I just Am.  And I Am Better.  Steve lives with me alongside my life as it is now, and my life has moved on to include happiness, peace, laughter and love.  I am a Survivor.
The painting is not yet finished.  I want to add the chair I am sitting on, and some other little details like my earrings, and touching up my hair a bit.  And the hands need some work and my ring needs to be added.  But I love love love this yellow colour.  It is absolutely the Right Thing to me today.
More on the Private Dublin showing of A Graceful Death as it unfolds.  It will be showing from Thursday 21 October to Monday 25 October.
Posted by Antonia Rolls Artist and Soul Midwife at Monday, September 27, 2010 1 comment:

John Horne - "Papa". A New Painting Of A Lovely Man 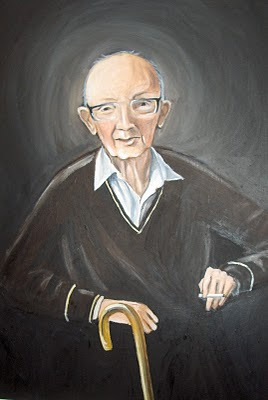 Papa  (by Kate Massey, Papa's Granddaughter)
John Horne (29th November 1911- 5th September 1999)
My Papa was born in Grangemouth, Scotland, just before the first World War.  His childhood was poor but very happy.  Growing up during the depression, there was no money for extended education, so he left school at fourteen and became an apprentice painter and decorator.  This suited his naturally artistic temperament and he enjoyed his work.
He married my Grandma, Isa, just four days his junior when they were both 25, and she was the love of his life.  Shortly after their marriage, they were separated for over five years during WWII as Papa served in the army as a driver.  His tales of war-time were never of conflict or hardship, but of how his painting skills were used to make scenery for their amateur dramatic shows, or of how he once drove from Italy to Belgium without stopping, constantly eating dry biscuits in an attempt to stay awake!  At one stage in his service, he was involved in looking after POWs and befriended a German painter from the Black Forest.  Papa got some oils so the POW could paint, and in return the POW painted a scene from his homeland for my Papa.  It was one of his most treasured possessions and was displayed above his fireplace for decades after.
After the war, he resumed his quiet and unassuming life, working, looking after his family including his two beloved children - my uncle, Jim, and my mum, Isobel - and serving as an Elder in his parish church.
I didn’t meet my Papa until 1977.  He’d just retired, and a demanding little granddaughter was just what he needed to fill his time.  My little sister, who arrived two years later helped too.  Papa and I were very close.  I have so many memories of him teaching me to play cards and dominoes, taking me to the park, watching Fred Astaire and Ginger Rogers movies with me, drinking endless pretend cups of tea when I was playing with my plastic toy teaset, drawing pictures for me, covering the formica coffee table with pencil lines so we could play shove ha’penny.  He never got bored of playing.
Papa had the worst sense of humour in the world – he was the only person I knew who found the jokes inside crackers genuinely funny – and every visit brought another quip he had collected from the radio.  We were always laughing about something.  Grandma would just tut at his nonsense, then go and make him another cup of tea, with lots of milk and practically a ladle-full of sugar, before finding some lemonade and biscuits for me.


Dementia and then cancer slowly stole my grandparents away.  Soon, they were in a residential home together, most often found sitting on a little double sofa by the front door, greeting any visitors.  My Grandma’s memory loss made her increasingly difficult, yet my Papa loved her to the end, and was practically bursting with pride the day they celebrated their Diamond wedding in 1997.  My Mum maintains that when Grandma died in early 1999, it was only because my Papa’s own memory loss gave him some respite from his grief that he survived her by as much as seven months.
We were lucky.  As Papa’s mental and physical health deteriorated, he became almost more himself than ever.  He covered his memory lapses with jokes, funny sayings and songs.  He couldn’t play cards and shove ha’penny anymore, but his love for us still shone out of him.  He may have taught me much through his life, but it was in his death he taught me the most profound lesson.  A human’s dignity is not based on what they can do, but on who they are.  My Papa was a good, gentle and loving man.


This portrait is based on a photo taken of my Papa weeks before he died.  He was so tired.  I knew we didn’t have long, and I took the camera with me that day because I wanted a few last pictures.  His leaving us was such a painful yet precious experience, and I wanted to hold a little of that forever.  Now, through Antonia’s work, I can hold it with the full beauty it deserves.  He died his own Graceful Death.  The day he died, I visited him.  He was asleep and looking so peaceful I couldn’t bear to wake him so I simply kissed him and left.  Later that night, the carers walked him to his room, and he was singing to them.  Once in his room, as they prepared him for bed, he slipped away.
Papa’s was a fairly ordinary life, lived quietly and without show.  Yet it was transfigured by his love.  At his funeral we chose for the reading the famous biblical treatise on love, and so I quote from it here:
Love is patient, love is kind.
It does not envy, it does not boast, it is not proud.
It is not rude, it is not self-seeking,
it is not easily angered, it keeps no record of wrongs.
Love does not delight in evil but rejoices with the truth.
It always protects, always trusts, always hopes, always perseveres.
Love never fails.
And now these three remain: faith, hope and love.
But the greatest of these is love.
1 Corinthians 13:4-8a,13 (NIV)
Kate's Grandfather Papa will be joining the A Graceful Death exhibition in Dublin in October.
Posted by Antonia Rolls Artist and Soul Midwife at Friday, September 10, 2010 No comments: