www.antoniarolls.blogspot.com for an account of being an Artist and Mother in Bognor Regis
www.antoniarolls.co.uk for my website
antonia.rolls1@btinternet.com to email me

Though very slowly it seems. I am sending out invites today, and will come up to London to do some personal visits to various places next week. I am always nervous of doing this, it is not easy to ask people to look at your own paintings.

I am looking forward to the whole thing. I have many friends and contacts in London, and I am hoping they will all come and will give me feedback too, on the paintings and the ideas behind the paintings.

The exhibition in December was a very important first step in asking for the conversation on How We Die to begin. I have only, so far, one story. Some people have many, some people lose friends, family members, children and even pets, and I can't imagine how they cope. I spent two years painting Steve, two years going over and over and over his last few weeks, days and day. I am in a much better frame of mind now, and am able to get on with life again. Steve will never go, but he is with me alongside my life now that includes a new partner for me, who is very supportive and deeply understanding of the whole A Graceful Death exhibition.

More when I have painted Mr Hiram Burnett. He is the new painting in the exhibition.
Posted by Antonia Rolls Artist and Soul Midwife at Thursday, January 28, 2010 No comments: 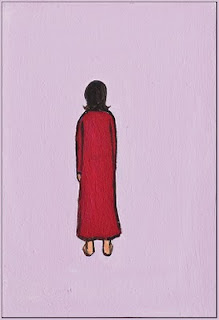 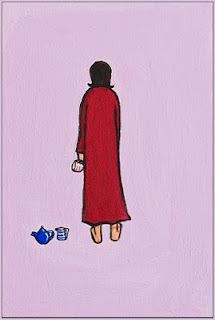 This little Diptych is in the exhibition and says that you can be so very alone and lost but there is always tea. Even if you stand with the tea mug drooping a bit in your hand. It is about Life Going On.

I am slowly putting the exhibition together. It is less hectic at the moment because most of the paintings are done. I just have to do the one of Mr Hiram Burnett before he died, when I get the images through from his daughter and my friend, Cecil. The invites are designed, the press release is done, the list of invitees is ready and the rest is just Process.

I am having 2 Private Views, one on the first day of this exhibition, and the second on the last day. Come to both, it is a lovely way to start and finish.

I hope to see you all there.

Posted by Antonia Rolls Artist and Soul Midwife at Thursday, January 21, 2010 No comments: 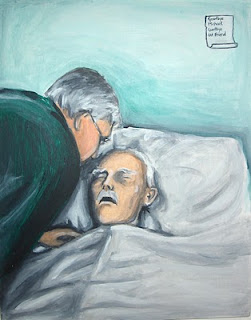 Goodbye Michael, Goodbye Old Friend
Last year a dear old family friend died. He was my father and mother’s close friend, and my father had spent many years teaching with him and travelling around Eruope in the 1950s. My father, despite having had a bad stroke, would come down from London to sit with Michael and this image is the last time my father saw him. We knew the Michael could not last long here, and my father finally bent over to him and whispered Goodbye Michael, Goodbye Old Friend, before getting the train back to London. Michael died a few hours later.
Acrylic on wood
"A Graceful Death" at 127 Worple Road, Wimbledon, London SW19 8RQ
Wednesday 24 February to Sunday 29 February inclusive, 10am to 5pm daily

Michael Copeman died last year, on Christmas Eve. He was my father's closest friend, and they had known each other since the 1950s. Michael never married, had no children, and inherited a wondeful old Manor House and grounds but lived in a converted coach house with all the paintings and wonders of the old Manor House in a kind of gallery in the part of the Coach House where the horses would have been.

Michael was a modest man, painfully modest and unassuming. His courtesy and manners were impeccible. He was tall, handsome, suave and the very image of the eccentric English Gentleman who could easily be mistaken for the gardener in his patched old clothes. Michael could and did scrub up well, going to many very fancy and exclusive functions, but was at his best out of the public gaze.

Michael was a fixture in my life from the moment I can remember being alive. He was always amused and amusing, had a wonderful fast sports car which I used to go in when I was about 6 or 7, and the best thing of all - he had an electic saucepan which I was too in awe of for words. He could plug the handle into a socket in the wall and it would cook stews and mince and he didn't have to do a thing (he said). Micheal was a wonderful and charming and rather eccentric bachelor, the kind P G Wodehouse may have written about. He lived in Felpham, a small walk from where I live in Bognor Regis, and I was privilaged to walk along the sea to have tea with him in his faded, shabby, delightful Aladin's Cave of a Coach House, with the most exquisite orange roses flowering when it was their season, on the old walls outside his windows, until he was taken into hospital for his final few months.

My two sons benefitted too from Micael Copeman. He paid for my oldest boy to be privately educated, and when Oldest Son went to the state sector, he paid for my youngest son to go to a small and very good private school instead. He also sponsored many other students through their education. He became firm friends with some Japanese students here in West Sussex, and helped them all to learn English, go to University and finally to achieve their PhDs He was a very generous man.

So this same Michael Copeman is remembered in this exhibition. He was a quiet, unforgettable, sophisticated man who did much good and didn't want any fuss. It is worth saying that he learned Arabic while working out in Libya because he loved the Arab culture, and when he met and became friends with his excellent Japanese students, (all of whom have shown Michael the love and deep respect and care of a family, in his last years) he learned to speak and write Japanese. Wonderful Man.
Thank you Michael, for Everything.
Posted by Antonia Rolls Artist and Soul Midwife at Tuesday, January 19, 2010 No comments:

www.antoniarolls.co.uk for my website
www.antoniarolls.blogspot.com for an account of being an Artist and Mother in Bognor
antonia.rolls1@btinternet.com if you want to email me

"A Graceful Death" Exhibition coming to London New Details
The "A Graceful Death" Exhibition will be shown in London at the following venue
127 Worple Road, Wimbledon, London SW19
care of Clarissa de Wend Fenton
sponsored by
Clarissa de Wend Fenton of Property Lodge
Ralph C Rolls
Michael Copeman RIP
Wednesday 24 February to Sunday 28 February inclusive
Open 10am to 5pm daily
Open Evening Wednesday 24 Feb from 6pm to 9pm
Closing Day Celebration Sunday 28 Feb from 6pm to 9pm
I look forward to seeing you all.
I am very happy to present a new painting for the exhibition. It is a wonderful image of a friend's father just before he died, and with it is the uplifting and moving account of his last moments with his daughter in hospital. This is very much in the spirit of the exhibition subject, how we die, how the end of life is the most important moment we will ever have, and how we who witness it have to carry on living. Until it is our time.
Posted by Antonia Rolls Artist and Soul Midwife at Sunday, January 17, 2010 No comments:

An Update On The London Exhibition 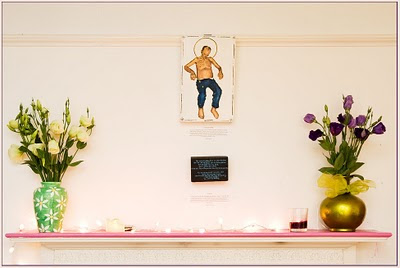 A Little More On The London Exhibition

It is the beginning of January, and I have had time to put away the A Graceful Death exhibition here in West Sussex. Above is a picture from the first exhibition.

The next venue will be in London at the end of February, the dates will be finalised on Thursday and I will put them up here on Friday. At this London exhibition, I will have one more image to add. I want this story of the End Of A Life to include other Lives too. I hope I can do the painting in time. More of that later when I have proper permission to paint the person.

It will be interesting to see how the exhibition presents itself to the London audience. I am giving an interview to a magazine later this week, and when that is up and running I will put a link to it.