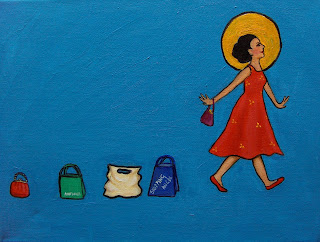 Shopping Angel
You are warmly invited to a weekend sale of Paintings, Prints and
Handmade Earrings
and
Wine and Tea and Cakes 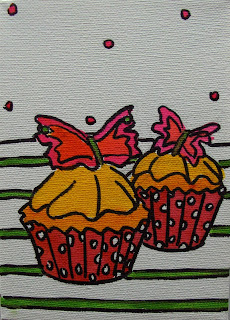 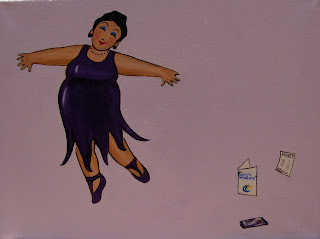 I aim to have this sale of Angels and Fairies and fun things while also displaying the latest information about the A Graceful Death exhibition and film.  The weekend is about having fun with all of you, with colour, fun, wit and humour, alongside the serious business of raising funds for the A Graceful Death exhibition and film.
As you all know, the A Graceful Death exhibition is about acknowledging the importance of the end of life.  It is about what it means to die, and what it means to survive - this means both to survive the process of grief and bereavement and to survive the treatment of cancer or other life threatening illnesses.  The A Graceful Death exhibition began with the death of my partner from cancer in November 2007.  I painted the last few weeks and days of Steve's life, trying to capture how though his body was ravaged by the cancer, the life, the spirit that made him Steve, lived on in him to the end.  The paintings are powerful and raw and full of love.  The A Graceful Death exhibition has now evolved to include the stories and images of others at the ends of their lives too.  It includes the images and words from those who are undergoing treatment for cancer, and those who have survived well past the five year mark.  My colleague Neill Blume and I are now making a film of the exhibition and its effects.  Neill will be there at the Angels, Fairies and Earrings Fund Raising Weekend, filming away - so come and be part of it.
A Graceful Death is a not for profit enterprise.  All donations directly to the exhibition are gratefully received.  I am very fortunate to continue with A Graceful Death through the kindness and love of those who support it both financially, and with time and practical help.
I make earrings with a passion too.  Apart from having loads already made, I will have all the beads and baubles in piles for you to select and design your own.  I will make them up for you then and there.  Your own design and colour scheme.  Go for it.
See you all there.  A Bar is set up for all those who need more than tea, and there will be cakes and sustenance to help you make your earrings, Angel and Fairy Painting and or print buying decisions.
Posted by Antonia Rolls Artist and Soul Midwife at Thursday, April 28, 2011 No comments:

Ups And Downs. A Reality Check And Some Magic.

www.antoniarolls.co.uk for my website
www.jesusonthetube.co.uk for the well known image of Jesus sitting on the London tube being ignored
www.antoniarolls.blogspot.com for an account of an Artist and Mother in Bognor Regis


The A Graceful Death Film Project -
Making a film of the effect an exhibition of paintings of death and the end of life (A Graceful Death, paintings from the end of life) has on those who are involved in the works, and those who come to experience them at exhibitions.   Showing how the exhibition is created and broadcast, and hearing what those who love it say, and those who don't love it, say.  And very significantly, showing how it feels to paint a sitter as they approach the end of their life, or as they face an uncertain future.  A section of the exhibition shows Survivors too, those who have come through illness, or the bereavement process, and are living again.
Click on the link below to see our video and to hear more and to donate to this important work.
http://www.wefund.co.uk/project/graceful-death-film


Ups And Downs.  A Reality Check And Some Magic


There have been some very interesting ups and downs for the A Graceful Death project.
This account will be about the difficulties that I have been encountering.  It includes too the progress that has been made, as the A Graceful Death exhibition, film and project  finds its way forward,  and the response to what we are doing is growing.
But first, I write will be about the joy of filming Nushi Khan-Levy.  Nushi is undergoing treatment for cancer.  She has agreed to be filmed and her portrait  is being painted for the exhibition.  Eileen photographed her yesterday, and Neill filmed her and I interviewed her.  A lot for a lady to do, who is tired from her chemo treatment. 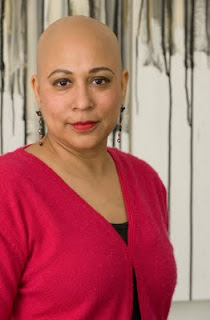 Nushi is someone I have known for many years.  She is a successful screen, television, stage and radio actress.  Nushi is busy, Nushi has two growing daughters and a demanding career.  Her husband is busy with his demanding career, the family is dynamic and fun, they know everyone, they do everything, and then Nushi got cancer.

Last year, Nushi came to the London showing of A Graceful Death hosted by Clarissa de Wend Fenton.  As ever, she was shining and vital, full of news and work, her girls going to university and everything as busy as it always was.  And so, a couple of months ago, I got an email from Nushi telling me that in the time between that exhibition and now, she herself had been diagnosed with breast cancer and had had to undergo two swift and urgent operations.  Now, she was mid chemo treatment, was very sick and apart from everything else, had lost all her hair.  When I read her email I knew that I wanted to paint her and that the word that covered her, to me, was goddess.  I asked her if she would take part in the exhibition as a Survivor, and she said Yes.  I asked her if we could film her, and she said Yes.  And so we did.


I wanted to film Nushi  because she will speak openly of the dark places she went to.  She can talk to us of the fears and the panic she felt about her diagnosis. "Ask me about being horrible," she told me, "and let me talk about fear." Nushi is wise and articulate.  She is willing to show her vulnerability, to speak of her reality, and then to make us laugh with her wit, her warmth and her sense of fun. The thing is, that Nushi does not look ill.  She has lost her hair, yes.  She has what she calls Chemo Brain, and gets forgetful and muddled, but one of the important points Nushi made, about herself, was that she had had a choice.  Either she curled up and went under, she said, or she made the effort to live each day at a time.  For me, Antonia, living a day at a time is a theory.  As far as I know I have many such days, and I have heard that living each day at a time, each moment at a time, is a gift.  I don't really understand it though, and I have no idea how to do it.  It sounds great, but I live all over the place; past, present, future.  Nushi knows how to live each day at a time.  She had to work it out and do it to survive the experience, she chose to do it.  So she paints on her eyes, her eyebrows, puts on colours, paints her nails (which she says are blue black anyway from the chemo) and does not like to wear her wig.  She says that there have been moments with her husband, during the diagnosis, the operations and the treatment, where time distilled itself into such heightened awareness and love and supreme consciousness of the moment, that she wishes she could bottle it and use it when her hair grows back, her life is more normal, and she is well past this time of treatment.


Nushi says she is doing Cancer Chic.  I thought that was wonderful, because actually, she is.


News now of the rest of the A Graceful Death project.


A very heartfelt thank you to all those who have been sending in donations for the Film.  I am very grateful and touched.  I have a dedicated bank account for this, and for those of you who want to send donations to me  by post, please email me on antonia.rolls1@btinternet.com and I will give my address. Unfortunately the We Fund donation site is not doing very well;  and it is time to update the video and reduce the amount we want to receive there.  It is a learning curve.  When I put up the video and the link, I had not realised just how my time would be dominated by trying to organise and publicise the whole concept of A Graceful Death.  I did think that all I had to do was tell people about AGD and they would love it - which may or may not be true, but I have learned that I need to constantly explore where this project (both the film and the exhibition) is going, who it is reaching and why it is so important.  I have been writing proposals for funding applications that are very detailed business plans.  I have had to address how I am going to achieve it all.

It is significant too, that this is non profit making, therefore working on it means that I am not earning. So, with important lessons being learnt as I write, I have been planning, organising, promoting, researching and  working at the A Graceful Death exhibition.   And have been really touched by the donations that have been coming in.  Thank you.
I do have a team working with me too, all of whom give so much  time, practical help and advice without payment. The A Graceful Death team are as follows -
I am very fortunate indeed.
The A Graceful Death exhibition is working on a new set of paintings and writings on the subject of suicide.    I am still hoping to meet, film and paint Patrick Joyce, the Incurable Optimist, who is suffering from Motor Neurone Disease.  Patrick is happy to take part in the A Graceful Death film and exhibition, despite putting on an extensive set of exhibitions of his own work.  Patrick is an artist, and is using his art to not only raise money for, but to raise awareness of, Motor Neurone Disease.   Please see http://patricktheoptimist.org/.
Finally, Neill and I are updating our We Fund video as soon as we can.  Please do donate to our film.  It is a truly life affirming project, A Graceful Death.
http://www.wefund.co.uk/project/graceful-death-film 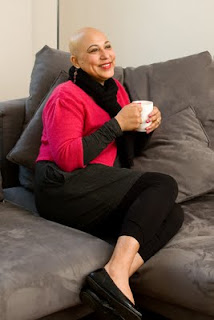