Some Responses To The Exhibition


Responses To The Exhibition


There have been a steady trickle of people coming and taking in the paintings, the words and the atmosphere of the A Graceful Death Exhibition. I have sat and watched people pass silently from painting to painting, thinking and observing and often remembering their own story. I have drunk so much tea this past week, sitting and talking to the visitors, and I am more aware than ever that People Are Fascinating. We have covered topics such as Death, Bereavement, Religion, Re-incarnation, Euthanasia, God and more. I even had two elderly ex world war two fighter pilots to visit, with all the stories of their lives and experiences.

A couple of the comments are below, and they represent the general feeling of the experience so far -

"A very powerful exhibition. As a cancer traveller I find this hugely emotional, challenging and reassuring. As Christian ministeers we feel this is tremendously important - a good, graceful death is what we should aim for"


"An exhibition that should be seen by eveyone - it has a message - a healing stlry which will resonate with everyone who has experienced a loss and separation. Brilliantly moving!!"

I am posting a few photos below to show you what it looks like. 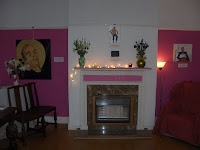 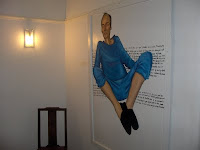 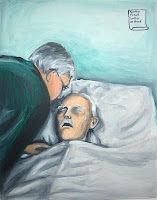 The first photo shows the images against the wall. The second is an image of Steve sitting beautiful and brave, on his chair waiting to die, with text behind about how hard it was for him and for me. The third is called "Goodbye Michael, Goodbye Old Friend" which is what my father is bending over his old friend of nearly 50 years and saying. This was the last time my father saw Michael, who died a few hours later. My father, despite having had some pretty bad strokes and not always finding remembering things very easy, came on the train weekly from London to sit with Michael here in Bognor. This was an intensely personal moment, and it was very hard for my father to have to leave to catch his train.

I am expecting some more people today, and will carry on with the tea drinking and the listening and talking.
Posted by Antonia Rolls Artist and Soul Midwife at Friday, December 11, 2009