Filming of A Graceful Death Starts Today (And Other News)

www.antoniarolls.co.uk for my website
www.jesusonthetube.co.uk for the Jesus on the Tube image story and image
www.antoniarolls.blogspot.com for an account of an Artist and Mother in Bognor Regis
http://www.youtube.com/watch?v=Fl44L6Izrd0 for a short film from the first weeks of creating the A Graceful Death exhibition by Bertram Somme 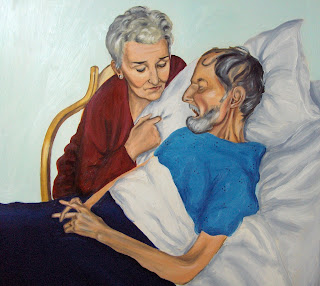 Peter Snell and his wife Anne.  Oil on wood 24"x 24"
So today, we start the ball rolling.
Other News
The paintings are being delivered to Manchester to Rev Rachel Mann by the weekend.  They are coming from Dublin and are being couriered over by the kindness of an Irish business man who has put himself out to help.  I am going up this weekend to check them and to see if they have survived the journey.
In the Spring, I am hoping to paint the portrait of an inspirational young man in his 40s, who is dying of MND.  He is a fabulous artist, a family man, and an all round normal human being.  He has agreed to a portrait, so Neill and I will go and meet him in April, and I look forward it.  I haven't met him, but from what little I know of him, he is witty and articulate.  Wonder if I will paint a wheel chair?  I have never painted a wheel chair before.  Got to understand how it works before I can paint it.  Another little job to do.  Once the meeting is finalised and I have his permission to publicise the painting, I will name him and introduce him to you.  He doesn't really need introducing - he is far more active than I am, he publicises MND and it's
campaign for a cure.
Back to the A Graceful Death in Manchester.  A painting of my darling partner as he waited in the hospice to die.  This is powerful and beautiful and terrible all at once.  This is the image that began the whole A Graceful Death exhibition.  It went to be part of an exhibition in Glasgow Cathedral a few weeks after Steve died, and the man who was curating in the Cathedral said of it,  "Ah.  A graceful death." which was how the exhibition I am now producing got it's title.  A big thank you to that inspired curator. 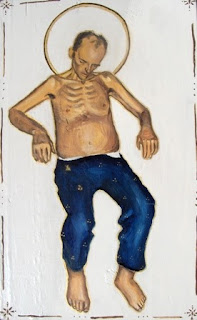 A Graceful Dying.  Waiting in the hospice, a few days to go.  Oil on wood, about 12" x 9"
Opening Night is on Saturday 19 February, at the church, from 6pm to 9pm.  See you all there.
Posted by Antonia Rolls Artist and Soul Midwife at Wednesday, February 09, 2011