Today, Snowy the Cat is the Star. 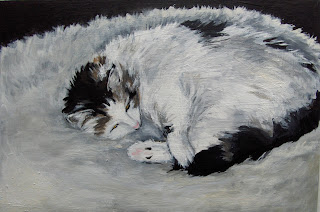 I am sitting in St James’s in Piccadilly as I write this.  I thought an update while it is happening would be very on the ball, so here it is.

A Graceful Death is exhibiting in St James’s Church in Piccadilly, in the wonderful old wooden gallery up some stairs, overlooking the main church below.  Sitting in the pews and looking up to your right, will give you a small surprise as you will see some paintings of those nearing the end of life looking down at you from above.  There have been quite a few startled visitors to the exhibition wanting to know what was going on up here, having been a little surprised while quietly saying their prayers in the main church below and glancing, as one does, to the right towards the beautiful Wren windows, and seeing a painting of Steve looking down at them, as he sat so ill in the hospice a few days before he died.

I have just met a most interesting lady.  She came up the stairs to the exhibition with two friends, both of whom left very quickly.  This lady came into the exhibition with purpose, and having looked at most of the paintings, spent a long time at the far end of the gallery.  From time to time this lady wiped her eyes with a large, white hanky, and I wondered what painting had moved her so.  She was old, very thin, with long hair tied into a pony tail.  She seemed self-contained and a little eccentric.  When she eventually came to say something to me, I was not expecting her to have cried so much over the picture of Snowy the Cat. Snowy the Cat was added to the A Graceful Death exhibition at the request of the poet Rosie Miles;  Snowy is a much loved and often missed cat.  Well, the memories that Snowy the Cat prompted, are as follows:

A while ago, my long thin lady had been diagnosed with an aggressive and fearful cancer and had had to undergo emergency surgery and intensive chemotherapy and radiotherapy.  It was chaotic, and it was a miracle that she did not die.  However, she said that during her treatment, amongst other things, her memory seemed to have been utterly wiped clean, her ability to do even the smallest thing was incredibly hard. Her therapist however, (she used the word therapist and so I shall too) had a cat.  This cat always sat on her bed, and she became very aware of it.  The cat became ill too, and my long thin lady was terribly concerned that it would not survive.  She had resisted going into a nursing home, it seems that she was being cared for privately and had the services of her therapist and the cat – one of her reasons for not wanting to move anywhere else was that she had devised for herself a diet that was incredibly restrictive, she was afraid no one would be able to keep up with it.  However, the cat in its illness, became a focus for her and she fed the cat – presumably with her therapist’s agreement - her own special diet.  The cat, she said, was very appreciative.  As this lady slowly recovered, she was able to cat sit for her therapist.  The cat, said the therapist, was still very ill, and would die soon.  My lady was not to be upset nor alarmed, but should care for it as best she could, when the therapist could not do so.  How, thought my lady, could she best care for the cat, when her own treatment had taken her memory away and made her so ill herself?  I would want to know everything that happened to my cat, she said, if it was my cat, in the care of someone else, and not likely to survive.  So she wrote a diary day by day, such that she could, in her jumbled state, of the cat and its movements and health.

The cat survived.  It did die, later on, when it was well and truly old. But while my long thin lady was dealing with her own cancer, her own ill health and the nightmare of treatments, she managed to focus on a cat that had its own illness, and to bring it through somehow.  And my long thin old lady survived too.  Her eyes are going now, she said, and her hearing, which explained why she was looking so intently and for such a long time at the painting of Snowy.

With a lovely smile and a cheerful wave, she said goodbye and left.  Her parting words were that there is such a powerful link between the animal world and the human world, if we look for it.  She is delighted to have seen Snowy included in this exhibition, and it moved her to remember the way her therapist, by giving her the cat to care for, brought her through her own terrible battle with cancer.

So, today, Snowy is the Star.