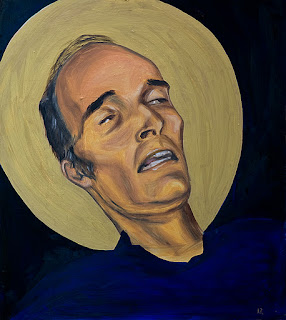 A Graceful Death
An exhibition of paintings from the end of life By Antonia Rolls
Photography and recordings by Eileen Rafferty, Poetry Workshops by Penny Hewlett

Poetry Workshops for all with poet Penny Hewlett on Thursday 29 and Friday 30 March, times to be confirmed.

You are all welcome.  To the exhibition, the opening event and the poetry workshops.  Come, see, talk, take part.

The A Graceful Death Story.
The First Stage.

A Graceful Death is an exhibition of paintings about the death of my partner from liver cancer.  I watched him move from a life which we took for granted, through the process of dying, to his death, within three months.

I was unable to put the experience of watching him die into a place that was safe and understandable.  I photographed him with intensity and a passion that was beyond words before, during and after his death.  It then took me two years to commit the experience into these paintings.  I had no interest in Steve as he was before the cancer started to change him; I was obsessed with his last few weeks, and only wanted to remember him as he was then.  Despite his body seemingly unable to support the beating of his heart, and despite his struggle to keep breathing, his spirit did not give up.  His breath kept coming, his hands kept moving; his body contained the paradox of life and death at the same time, and the strength of both these forces was beyond my comprehension.  This is what the A Graceful Death exhibition is about.

The day Steve died, I sat with him and saw the empty husk of a real, once powerful, man.  The description of a body as a shell or an empty container, is true.  The power of life has gone and this is where the most pressing of all the questions begins:  Where did he go?  What happened?

This exhibition started with my story.  I hid in my studio for two years trying to hide what I was painting. Those who stumbled onto the paintings however, looked at them with recognition.  This, they would say, is like my mother, my father, my friend, my daughter.  The images were already recognisable to those looking at them; I was not the only one to have suffered bereavement.  And the images I surrounded myself with, were the same images that many, many, others have kept in their minds and hearts following the loss of someone through death.  Some people cried, and the tears were a relief.  It seemed that these images were powerful enough to get us talking and to help us feel that we were not alone, and certainly not mad.  Some responses were angry, and that was not a problem either.  I had been very angry, and had written a prayer that was unequivocal about God having conned me, and lied to me.  I don’t feel like that now.  There was space for anger too, and at no time did the feelings that we uncovered with the paintings, feel too much.  It was a relief to speak of our experiences and find we were able to understand each other.

The exhibition began with Steve, and his paintings are now finished; but the story of everyone else is just beginning. Now, I paint other people approaching death.  Those either facing the end of their lives, or who are undergoing treatment for a life threatening condition.  I am including paintings of Survivors in the exhibition; survivors of the bereavement process, and those who have survived a life threatening illness and are, for the moment, all clear. Alongside each painting are some words from the sitter, telling us something about them.  Included in each exhibition too are the poems that are created at the Poetry Workshops run by our A Graceful Death poet, Penny Hewlett, and poems sent in by people moved to do so by the exhibition.  These are displayed on our Wall of Words.  Eileen Rafferty, who takes all the A Graceful Death photographs and helps with each exhibition, is recording interviews with those sitting for paintings in the exhibition, and these will enhance their story.  Neill Blume, a film maker, is creating a short film to show how the exhibition works, and some of the reactions of those who visit.

The exhibition is beginning to work alongside training programmes in palliative care.  It is beginning to show alongside awareness raising events for end of life issues, and to be part of a large and organised public debate on death and dying. I am showing the exhibition alongside speakers, workers and experts in palliative care, to educate, encourage debate, and to start the conversation on what it means to die.  In May 2012 the exhibition will show in a programme for Dying Matters week, alongside training events for palliative care professionals.  In November 2012, A Graceful Death joins forces with Sheffield Universtiy to exhibit alongside seminars, discussions and lectures on end of life issues from the faculties of, amonst others, Medicine, Philosophy and Religion.

A Graceful Death exhibition is about the end of life, the way we die, and the process of our dying.  It is also about educating people in the work that so many do to help people as they die, helping both professionally and as carers at home or in our communities, and the ways in which we can understand the process of the end of life better.  We, who are not yet in this position, watch others go and know we too will follow at some point.  It is important to know this and to acknowledge it.  Our lives are finite, and it is certain that we will, whatever we feel about it, die.  Once we have lost someone we love, death can become less fearful.  It becomes easier for most of us to speak the word death and to talk about dying.  And having the dying live honestly amongst us is the best thing we can do for them, and they for us.

This exhibition is profound, raw, powerful and real.  Death and Dying are unforgettable.  It is also about love, life, hope and the fact that Life, really, Does Go On. 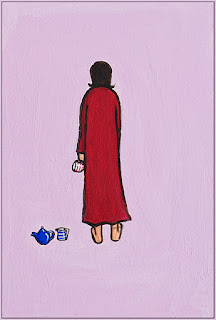 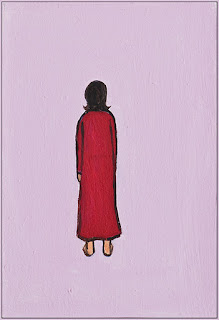 “Alone With Tea”  diptych that says that even though your heart is breaking, there is always Tea.  And even if you hold your mug drooping at your side, there is still comfort. Acrylic on wood.