A Graceful Death started with me losing Steve.  I was forced to accompany him to his death out of the blue, there had never been anything like it in my life.  Steve had had cancer before, and was given the all clear, so we thought that the all clear meant Never Again, Banished and Over.  When a routine test showed worrying shadows on his liver, we simply did not believe it.  It is something else, we said to each other.  It is bound to be a simple thing and anyway, we have an all clear, nothing can harm us now.  When we were gently guided towards accepting it was cancer, we said No way!  to each other.  We can will this away, we said and we went on holiday.  During the holiday, Steve set about stopping the cancer with his mind, and I had such perfect faith in him, I let him get on with it.  Our appointment with the hospital when we got back was a terrible shock.  The cancer had grown, and there was only palliative care as an option.

Holding onto Steve as he got more and more ill, I had to learn that when someone is going to die, they are going to die.  I had to learn to let go and do the best I could for him without clinging onto his exhausted body and shouting NO!  I will make you better!  I had to step back and accept that the process was going to happen whatever I did or thought, and that was very hard.  Steve's death was very much his thing.  I had to learn to follow, and watch, and understand that all I could do was go so far, and put up with it.  I was told by a wonderful cousin, that I could only dance so far with him, he had to finish the dance alone.

The work I do now for AGD is about giving the end of life some meaning.  I paint people who are facing either their own deaths, or facing a life threatening illness.  It is not only about who is dying, but how they are dying.  Eileen Rafferty, the friend and photographer who works on AGD with me, and I are realising that the conversations we have around the paintings with new subjects and their families, are an essential part of the end product, the painting.  We have bought a camera and microphone, and Eileen intends to record the interviews that we always hold with the new sitter for AGD to show alongside the painting.  The paintings are good, they capture a visual moment, but the talking that goes on around the painting, is full of insights, thoughts, difficulties and for us who are not going through it, information.

I have been training as a Soul Midwife, alongside my AGD work.  A Soul Midwife is an emotional and spiritual companion for the dying.  I am only a beginner, and I have much training to do.  As I expand my work with AGD I come into contact with more and more people who are facing their deaths and, of huge importance, I meet their families and carers.  This is where I apply whatever I know of Soul Midwifery and I realise that I know next to nothing, but, I am helped along so much by those who sit for the exhibition.  I do not accompany people as a Soul Midwife unless they request it, and it is not linked directly to AGD, but sometimes I am requested while working on a portrait, to help with the emotional and spiritual support. I will do anything that I can, and am often in awe of the power of the dying to cope with their condition.

Eileen and I have found that the most important part of what we do for AGD (and isn't this true of life itself?) is to listen.  Before I do a painting, Eileen and I interview the sitter.  It takes more than one interview, and this is where so much that is needed to be heard, is said.  This is where Eileen is going to record the words.  She has already recorded Stuart Pryde who talked so brilliantly of his wife Sue's suicide, which will be shown in the St James's Church exhibition coming up, alongside the paintings of Stuart, Sue and Sue's suicide note.  We are going to record a wonderful couple here in West Sussex in March who are suddenly catapulted into cancer and the rapid change to their lives and dreams.  A painting will follow, of both ladies, and another small opening will take place.  We will record both the patient and the carer, and it will expand the scope of AGD to include how the prospect of terminal illness affects the partner who in most cases, is also the carer.

This year, 2012, sees A Graceful Death take part in Palliative Care conferences and training programmes. I am also going to visit schools to talk to the pupils about the exhibition and end of life matters.  I am going to talk about the work I do, and the impact the exhibition has on those that see it - and I suspect, the impact it has on me.  I am always affected by the work.  I am delighted to speak about AGD and I am delighted to show it.  I hope to see you all at the exhibition in St James's  Church in Piccadilly next month too. 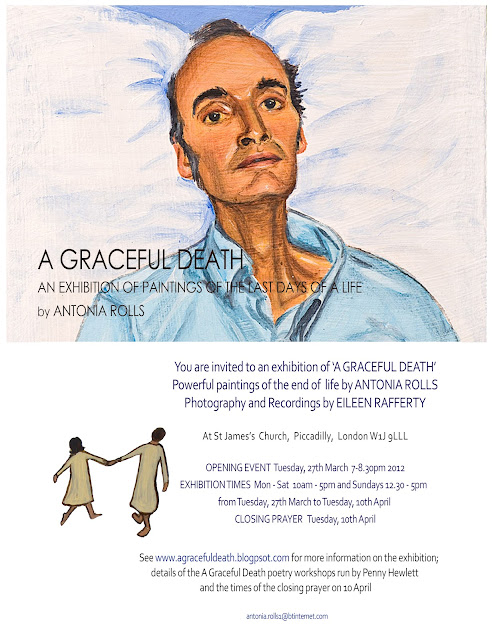